During the snow and ice storm that we had in Oregon this past weekend, I got in some extra sewing time. In addition to finishing up my flying geese for the Star Light Star Bright QAL, I also finished my February block for the Aurifil BOM!

February’s Aurifil block is designed by Amy Gibson of Stitchery Dickory Dock and is called “Mother’s Day.” It is such fun block to make featuring half-square triangles.

Here’s a look at my block in the snow using red and black fabrics from my stash. My background fabric is Kona cotton in Shadow.

Here are my January and February blocks side-by-side:

I’ve recently been experiencing with a new smartphone app called Waterlogue. It takes your pictures and turns them into watercolor paintings – very cool! I used this app with my February Aurifil block when two of my cat inspectors decided to check out the block. I’ll post the before-and-after pics together. What do you think?

Romeo and February Block in Waterlogue

Tiger and Feb Block in Waterlogue

The great snowstorm has now melted and we are back into our regular winter pattern of rain and wind!

I found 2 of my postcards framed and matted! These were displayed and for sale at A Quilter’s Affair in the common area. I’m not sure about my other postcards. They could have sold yesterday or haven’t been on display yet. #wishuponacard2022 #wishuponacard #soqs2022 #quiltersaffair2022 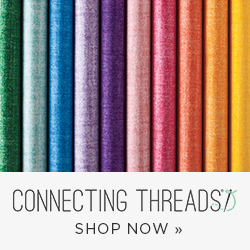